What’s in a name?

The name assumed by David Hugh Williams by the time he was 26 is redolent, in all its three parts, of the Napoleonic Wars:

Earl St Vincent, the former John Jervis, became Admiral of the Fleet in 1801. His name derives from his defeating the Spanish at the Battle of Cape St Vincent in 1797.

Carron is a town near Falkirk, by the Firth of Forth, and the Carron Company was a large ironworks renowned around 1800 for its lightweight swivelling cannon, the Carronade, carried aboard ships of the Navy.

Wellington — well, you know the rest.

Additionally, there exist in the Western Highlands of Scotland a River and a Loch Carron, and a well-known hill shaped like the profile of the Iron Duke. Whether Vincent would have been familiar with all of this around 1915, when he chose his name, we don’t know.

VCW claimed to be its Secretary in 1935 when he donated a prize at the Merioneth Eisteddfod held at Dolgellau. We can find no trace of such a body — have you ever heard of it? (There is a much later unrelated society of this name, of train modellers).

There is also a local association of anglers and landowners, the Assynt Angling Group. 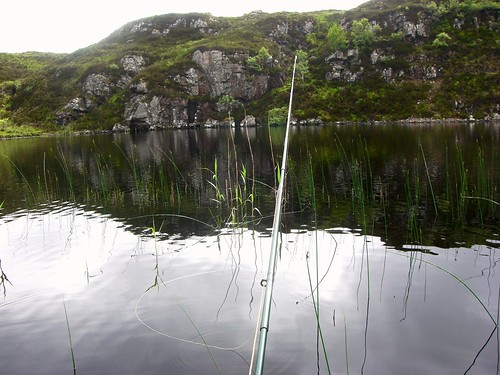 We have heard from a French fly-fishing enthusiast who vists Assynt regularly by overnight sleeper train (a wonderfully old-fashioned thing to do) and maintains a photo gallery online, from which the above picture is taken. There are also many beautiful photos of the sort of catch VCW must have secured, at Trouts of Assynt.

A much sought-after early example of this reel was owned by Vincent, and sold by him in 1944 when he was apparently financially embarrassed. Mr Leszek Delag has owned it for some half a century and has written this delightful account of its history, accompanied by these photographs (click on them to enlarge) illustrating its VCW provenance. The letterhead on which Vincent wrote the receipt is a clue to his occupation at the time, but no further evidence regarding Mono-Initialcraft has been found. Presumably Vincent was employed by them in some capacity, perhaps sales, where his personality would have fitted well in the circles in which the company operated. He was living with Lilian at 61 Palace Court at this time.

Fellowship of the Zoological Society of London, which runs Regents Park Zoo and conducts research. Then, as now, this distinction was easily acquired, requiring no qualifications beyond a proposer and seconder. Vincent’s book was in preparation when he took the Fellowship, presumably with an eye to the book’s title page. Beyond his election, he is never mentioned in the proceedings of the Society.

Fellowship of the Society of Antiquaries of Scotland. Like ‘F.Z.S.’ this was and is readily obtained given a proposer and seconder. Again, Vincent acquired this while his book was in preparation, and beyond his election he is never mentioned in the Society’s proceedings.

This accommodation address operated by British Monomarks Ltd is used by VCW at various times in the 1950s — as indicated in his changes of address recorded at the Zoological Society of London. It may sometimes indicate periods of ‘no fixed abode’, and he uses it for effect in the preface to his 1952 book ‘The Adventures of a Sporting Angler’ (Oliver & Boyd). Doubtless by design, it is delightfully reminiscent of Apsley House, the Duke of Wellington’s residence at Hyde Park Corner. This was known as ‘Number One, London’ as it was apparently the first house encountered by travellers disembarking from their carriages at Knightsbridge, around the year 1800. Customers of British Monomarks were free to invent any address they liked as long as it started with ‘BM’, and the post office, now as then, knows to direct the mail to the company’s central London sorting office, for forwarding or collection. BM addresses are popular with individuals and organisations ‘on the move’ or wishing to avoid unwanted attention from callers.

Do you have any connection with the late Margaret Moffatt Brown, LL.B., (believed 1923-1996), “Lecturer on Roman Law”, Birmingham, whom Vincent acknowledges for having prepared his typescript? Her name is spelt both Moffat and Moffatt within the book. She was a poet whose work appears in the book, and she has been anthologized in recent years.  Have any memories of their association been passed down? Please let us know.

VCW was Manager at this social and drinking club for the Welsh in London circa 1955, when it was based at 225 Oxford Street, above the Studio One cinema. It seems to have been a large and lively establishment — have you any knowledge of it at that time?

This was a curious parting shot to posterity on his death certificate; so far we have no evidence of any activity under this name. ‘Peter Ross’ is the name of a popular type of fishing fly, which VCW employed and mentions in his book. Ross was also the name under which, as a plain Aircraftsman, Colonel T E Lawrence joined the RAF in 1922, some years after his actions in the Middle East, and Vincent likely knew this. Perhaps he was simply trying to throw us all off the scent of his real name and family background, since he knew ‘VCW’ would someday be revealed as an assumed name (there being no birth record for it, nor for V C Jones, his birth name according to the version of his past he created in his later years).